The Colorado Taxpayer’s Bill of Rights (TABOR) is an amendment to the Colorado Constitution that mandates any new increases in taxes or debt must be approved by a vote of the people.  It also places limits on how much money the legislature can collect through taxes and how much it can spend. Furthermore, if revenue collected from taxes exceeds the yearly limit, it must be returned to the taxpayers.

What are the main benefits of TABOR?

It gives Coloradans a voice.

TABOR requires voter approval for any increases in tax revenue or debt. This empowers voters because not only do they vote for their representative, but they have a more direct say in the policies representatives enact.

It happens every year around the country – a state frantically raises taxes to cover for a massive budget deficit because they spent too much. With TABOR, our state government can’t spend over a constitutionally set amount, avoiding massive tax increases to cover for politicians’ bad habit of overspending. 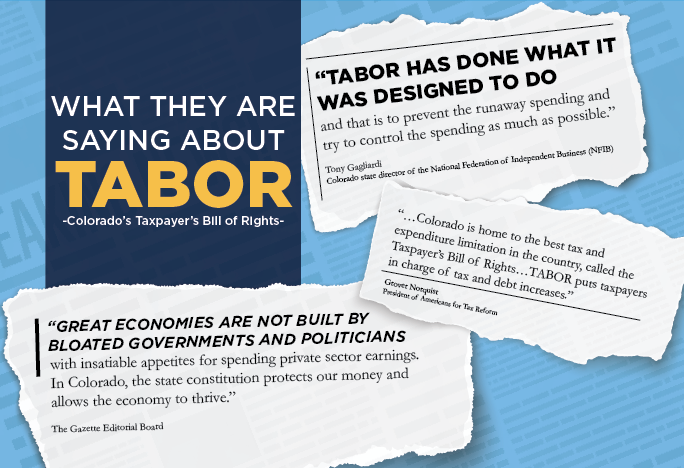 Why is TABOR under attack?

Over the past decade, opponents of TABOR who want power to frivolously spend your hard-earned money have found loopholes and ways to weaken taxpayers’ rights to vote for tax increases. They have filed court cases and even created exemptions that allow legislators to unconstitutionally collect more taxes.

What can Colorado taxpayers do?

Knowledge is power. There is a lot of misinformation surrounding TABOR and knowing the facts is important.

Sign up to learn more about TABOR and receive updates about events near you!

Receive updates about events near you and important facts on how TABOR is benefiting taxpayers.